I decided to write up a brief post about my trip to Iceland since I have been getting so many questions and comments. So here it goes...

On a whim for my 40th birthday and after seeing some remarkably low airfares I decided to book a quick trip to Iceland. Airfare was $330 roundtrip on WOW airlines with another $100 to check a bag roundtrip. A 4wd rental car added a bit, but sleeping in the car cut out any costs for lodging. I was gone about 72 hours, total with about 54 hours on the ground in Iceland with the rental car.  I opted for the cheapest 4x4 that I could sleep in, it ended up being a Dacia Duster. I was pretty happy with my ride. 6 speed manual, 4wd, peppy little SUV.

I departed BWI around 6pm, and was unable to really get any sleep on the plane. Its a little less than a 6 hour flight from BWI to Reykjavik. My flight landed a little early, arriving at around 0500. I rented from Go Car Rental Iceland, they were aware of my early arrival and called to let me know they were en route.  They pickled me up at the terminal and a 2 minute ride later we were at their lot where they got me sorted and I was on my way by 0600.

My very loose plan was to drive the southern route to Vik and Hofn and get in the Golden Circle as well, depending on time and need for sleep. I left the airport and headed south preparing to see as much as possible and take an absurd amount of pictures. At some pount driving in the first hour I realized I had left my spare camera battery and battery charger at home, where I had plugged it in the night before to top off my spare. I panicked a little as one battery charge had no chance of getting my through, especially with longer exposures planned. After a little research on my phone I found a few camera shops in Reykjavik that likely had my spare and a charger.

I altered my route and decided to hit the Golden Circle while waiting for the first of the camera stores to open around 10am so I could call them and bail myself out of trouble.  I should also mention at this point that phone and mobile data were super easy to setup and use through Verizon. They have a plan thats great for short trips where you can just pay $10/day and use your home data allowance. This worked out phenomenally, and coverage was solid everywhere I went. But I didn't venture very far off the Ring Road.

After hitting the Golden Circle it was around 10am and the camera shop was open. I phoned and they had a battery and charger so I hightailed it into Reykjavik and then back on the ring road south. A costly $140 mistake(for the cheaper off brand) to add to the trip tab.

Back on the road south and on to the sights.  I'll include brief descriptions in the image titles of what you are seeing.  After heading south for a day or so and passing Jokullsarlon and Diamond Beach, I went on another hour before realizing I was nearing the point of no return. I could continue hauling ass and push it to make it around the ring road in record time, or I could double back and see some things I missed and get a second shot and different light at some of the places I've already been. So I turned back.

Around the time I made it back to Seljalandsfoss it was sunset of night two around 2300, and I had to be at the airport at noon to drop my car. The light wasn't any good, so I pulled out the map and realized i could make it to Kirkjufellfoss by sunrise at 0245 if I moved fast.  So I did.  I made it just in time to wait around for the sun to never really poke through the clouds. Still was amazing. Then I continued around the Snæfellsnes peninsula and then back to Reykjavik in time to turn in my car and catch my flight home.

iPhone pic from the plane of my first view of Iceland at sunrise.

First up, a drive from the airport to Geysir. Pretty cool, but a little underwhelming honestly.

View from the road from Geysir to Gullfoss. Only a mile or two maybe.

Gullfoss. Amazingly powerful, photos do not do it justice. Those are people on the rock outcropping 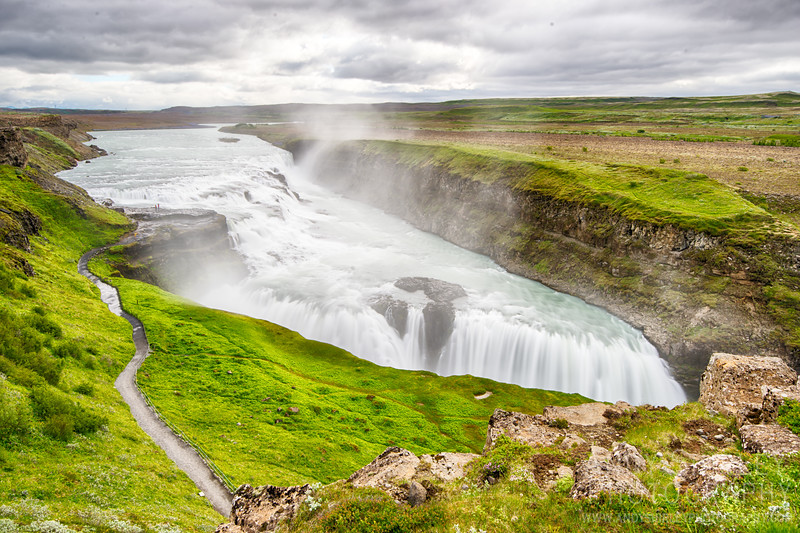 Bruarfoss. This one required hopping a closed bridge and a bit of wandering to find. Not on the main route, but worth seeing. 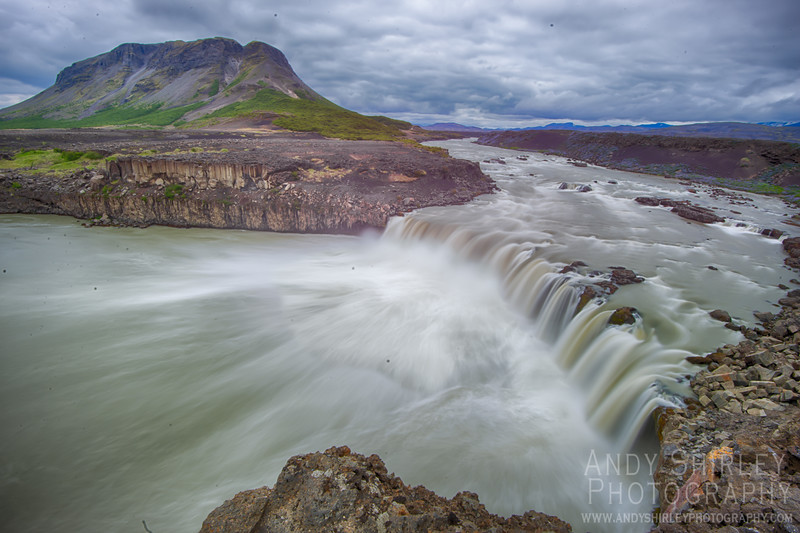 Gluggafoss(Merkjarfoss). View from midway up.

Lupine. Imported from Alaska to control erosion and now taking over as an invasive species. Pretty though. Drive from Gluggafoss(Merkjarfoss) to Selajalandfoss

Drive from Gluggafoss(Merkjarfoss) to Selajalandfoss. There are beutiful horses everywhere. And not so beautiful sheep

Seljalandsfoss. For scale: that tiny red dot to the right of the main falls is a person. 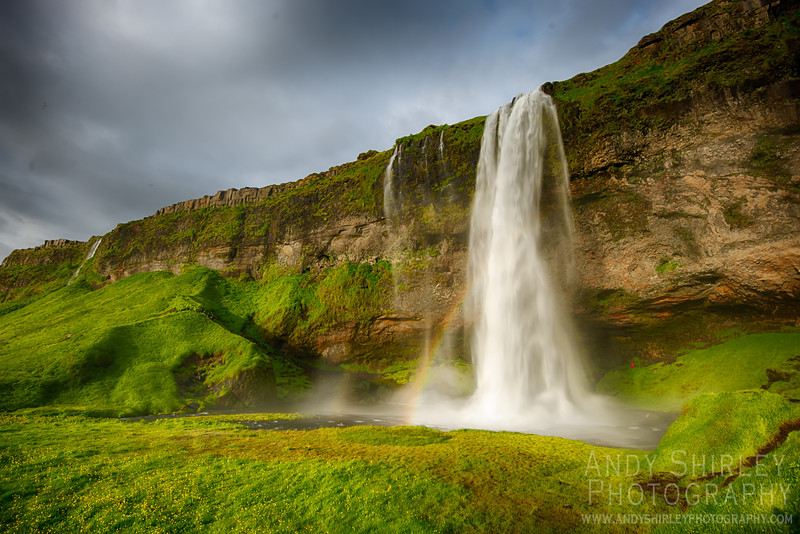 Skogafoss. It was just 25 minutes down the road to the next one. One of the definite highlights of the trip. I hit this location twice, once on the way down and once on the way back.

Skogafoss to Vik: amazing views of Eyjafjallajokull from the road 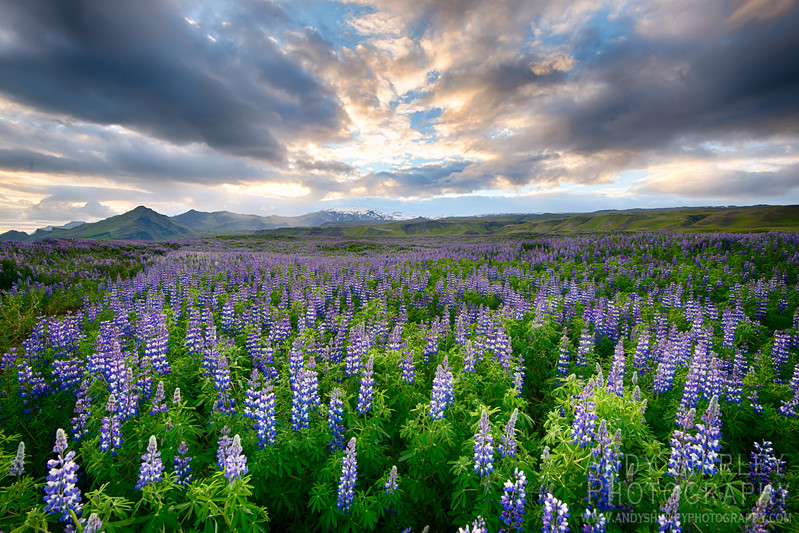 Headed towards Vik, this is looking back down the road to Eyjafjallajokull and Skogafoss 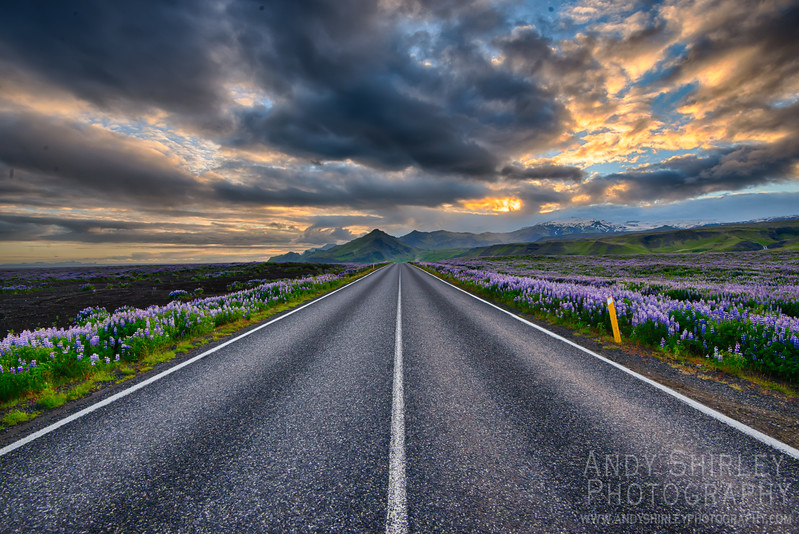 Reynisfjara. Basalt columns and sea columns. There were countless puffins flying around but not enough light to get any shots.

Reynisfjara. This is just after sunset arounf midnight.

On the road from Vik to Jokulsarlon, well past sunset. 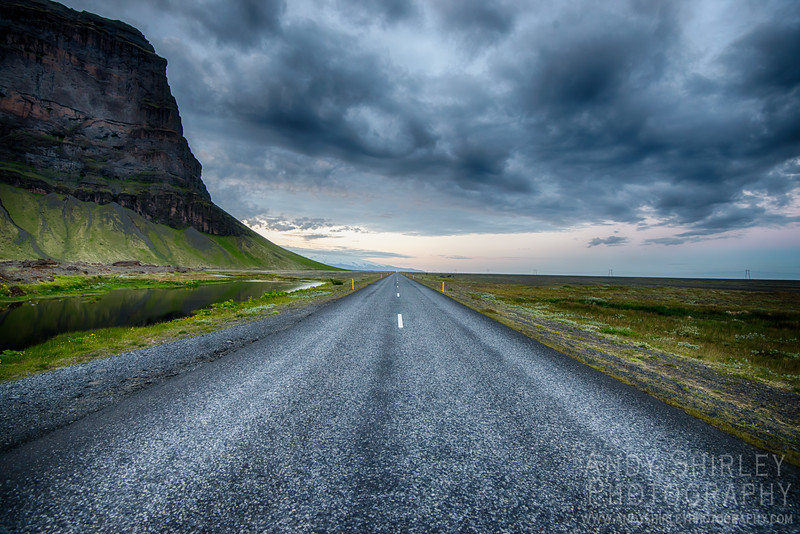 Looking back towards the glacier. Reflection in the predawn 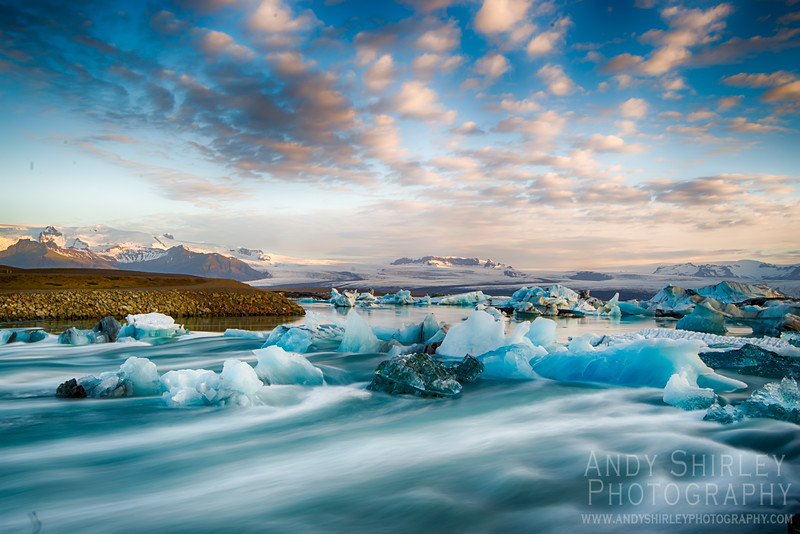 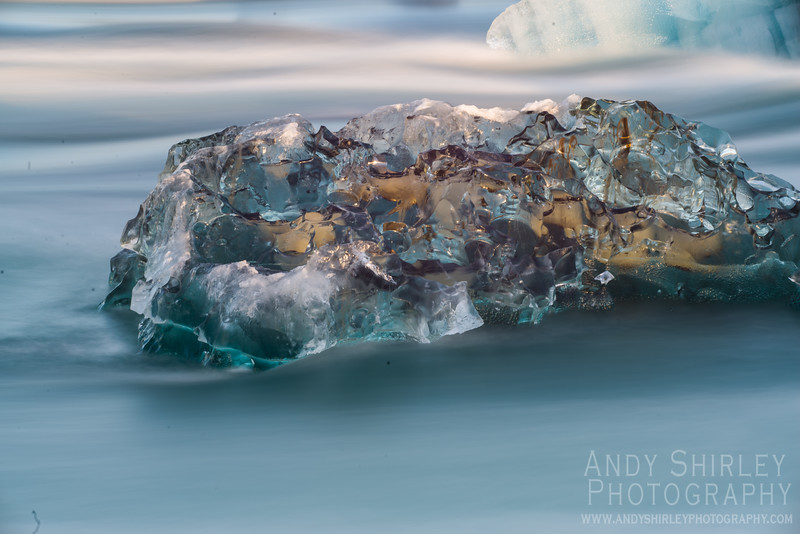 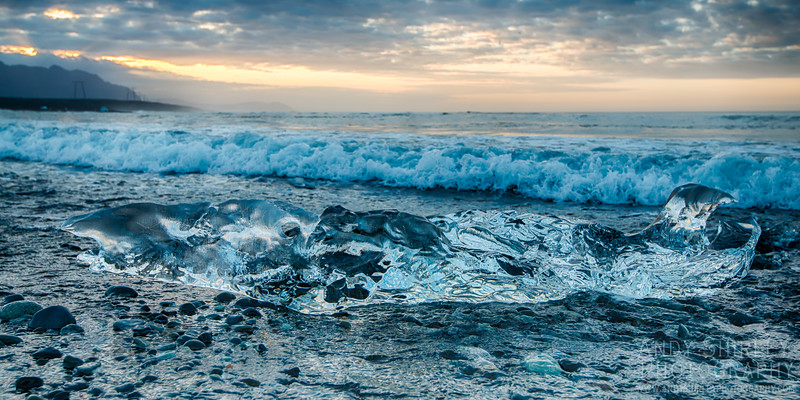 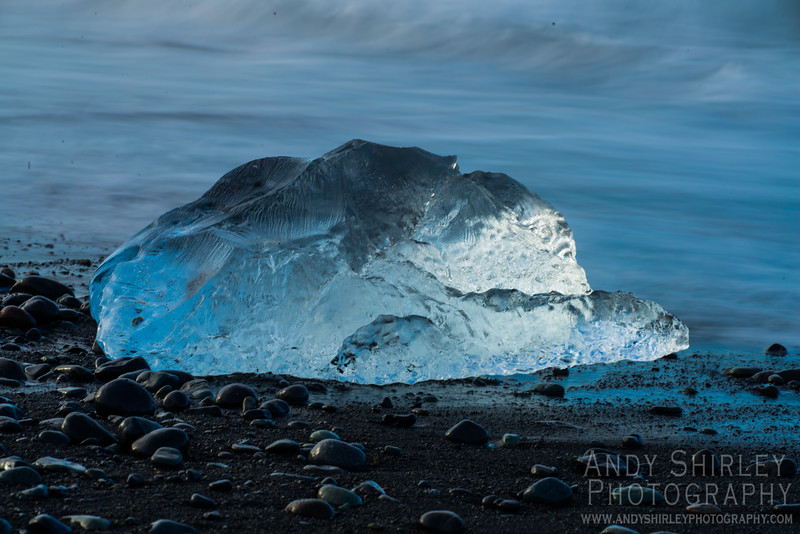 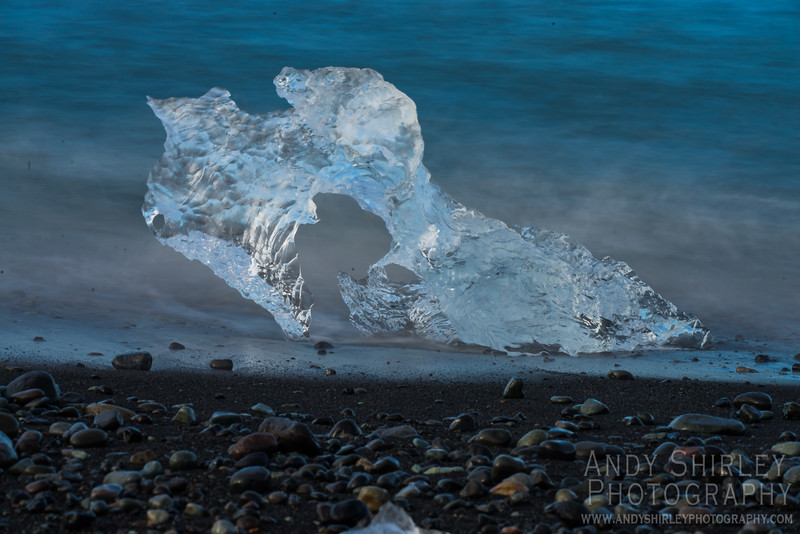 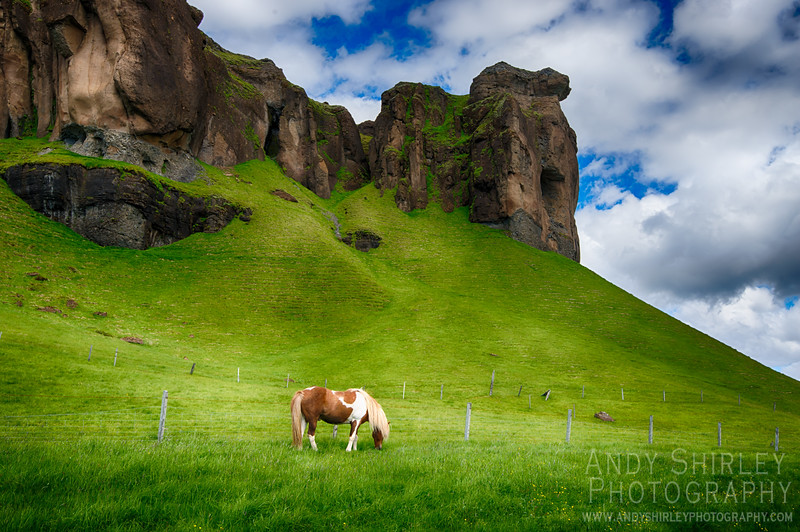 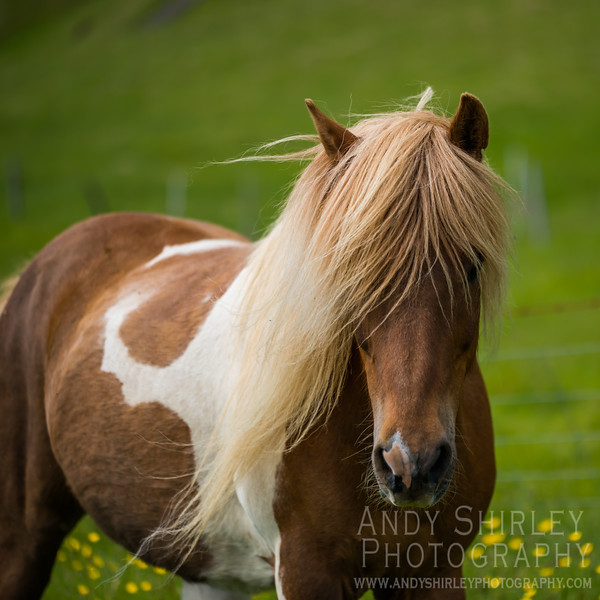 Return to Skogafoss. Happy I came back, much better light this time around. 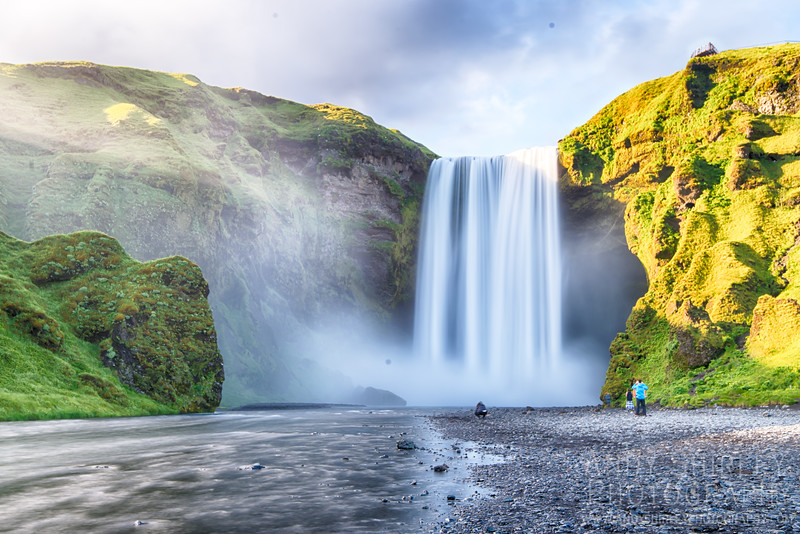 Horses in the evening sun

While driving from Reykjavik to Snaefellsnes a low fog settled in I was hoping there would be something to get a shot of. 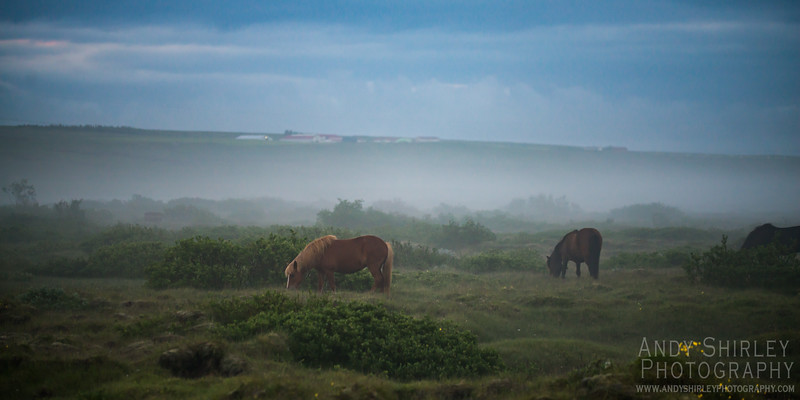 Horses in the late night. this was well after sunset, around 0030

the lower falls of Kirkjufellsfoss 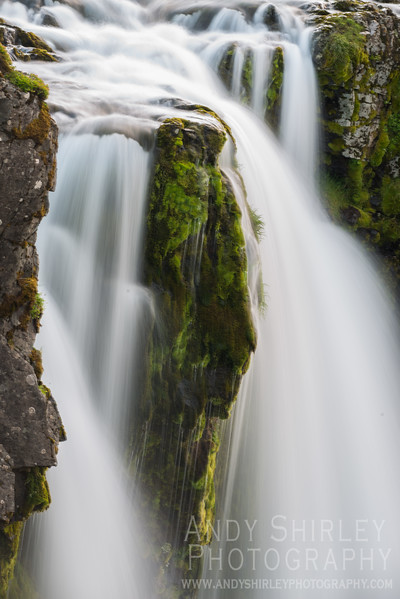 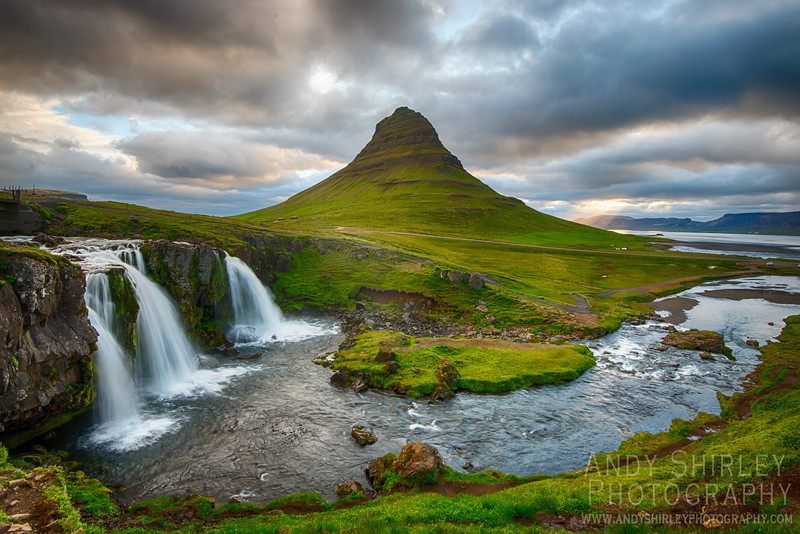 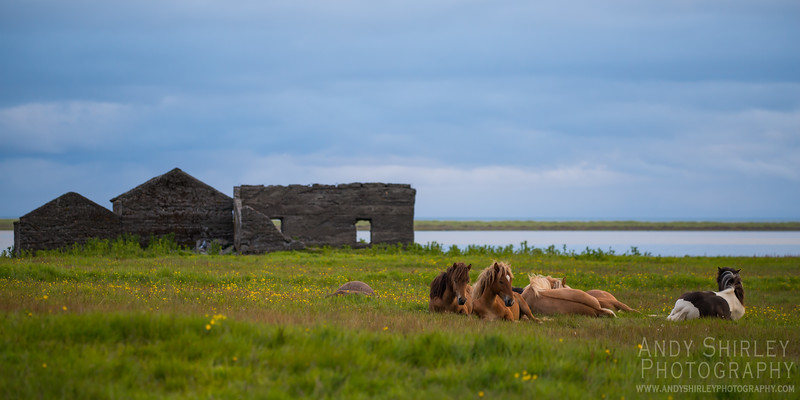 Church on the Snaefellsnes Peninsula

Either/or Kerlingafoss and/or Svodufoss. They just built a new road and parking area. But you still have to hike a bit, over unmarked "trail". I regret not having more time to spend here and get to the top and get some better angles. One of the prettier waterfalls, and a can't miss if you are in the area.

My ride: the Dacia Duster. Over 1200 miles in 54 hours. Average speed, including time stopped: 22mph. 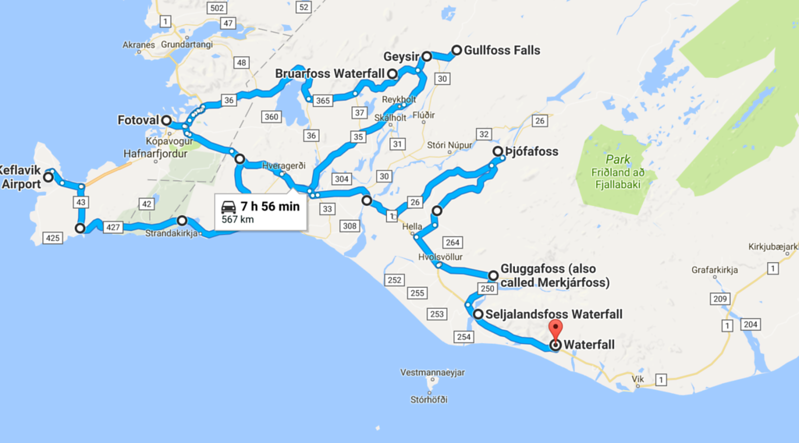 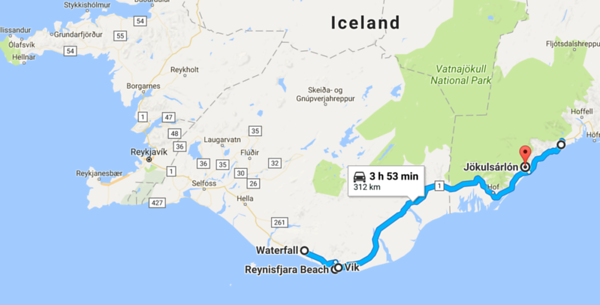 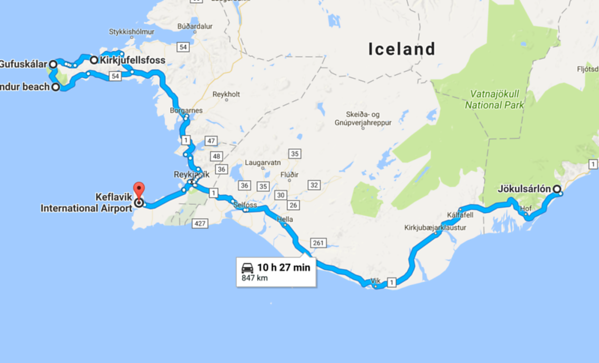